Angola is a well-known country and it welcomes foreigners to travel, stay, work or to do business. When someone is planning to go Angola, then Document Attestation is a crucial part of travel that must be followed perfectly. The Certificate Attestation for Angola is an important part of the verification process which will certify the authenticity of the documents. Educational Certificate Attestation for Angola may be a lengthy process. Therefore, it is suggested to get document attested from professionals as the legalization service providers are experienced.

The Angola Embassy Attestation is required for various purposes like to obtain any kind of visa except tourist visa or other professional purposes. The Attestation is also required to establish a business relation with Angola like import / export or to establish business there. It is a part of evidence that proves that the intended person/company visiting/exporting Angola with no ill intentions. It proves that the provided certificates are true and are permitted to use in Angola.

The process for Personal and Educational Document Attestation from Angola Embassy for Personal and Educational Documents o Regional or State Government Attestation The Attestation of documents from the state is carried out by three variant organizations as per the type of document. These Attestation organizations are the Home Department, Human Resource Department (HRD), and the Sub-Divisional Magistrate (SDM). o MEA Attestation Ministry of External Affairs / MEA, Government of India is the last stage of legalization from the home government after which an MEA stamp is applied on the document. MEA is the central authority of certification that concerns with the external affairs of the country. o Embassy Attestation Once the document will be completed from the State level Attestation and MEA then the document will be Legalized and Attested from Angola Embassy. It is the last stage of the Attestation or Legalization for Angola after the MEA Certification.

We offer following Personal and Educational Document Attestation for Angola

The time frame to complete the Certificate Attestation for Angola depends on various aspects, for example the type of documents, or the organization someone require it from. There is a long list of documents that may require attestation for Angola and takes different time. Normally, it will take about 15 days to 25 days to complete. The time duration also depends on the state of issue of the document.

Cost of Certificate Attestation for Angola

The fees for Certificate Attestation for Angola vary from state to state. The fees depend on many other factors like requirement urgency, the place of issuance of the document, type of the document (personal or commercial). The attestation cost for Angola may be low or high if HRD attestation has done or not. It may also depend on additional services like authentication of documents prior Angola Embassy Attestation, pick and drop services etc. To know the exact fees or charges for Certificate Attestation for Angola, call us now.

Abrodex Consultancy Services is one of the trusted names in the field of Certificate Attestation from Angola Embassy in India. It has been functioning for over 5+ years now and acquired the fame as a best service provider in India. It has developed this assurance and glory due to the expertise and patronage that it has accomplished over the years. It assists the valued customers with the best facilities as demonstrated under.

• Fast & Reliable Service will facilitate the trustworthiness and lawfulness to render fast certification for valued documents of customers. It has commissioned and is in confidence to its clients. • Quality Service will ensure to provide the highest quality service standards with perfect expertise. It also assures the accuracy and authenticity in attestation process. • Service accessibility across India is to ensure the ‘one nation - one charges’ for same services. 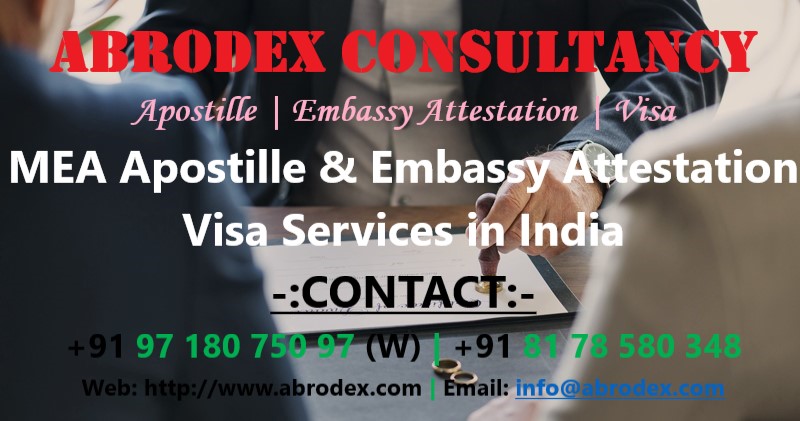 • Free pick and drop service will enable to enjoy the quickest and swift services at door step. The documents will collect and return back to the client’s location after the process. • Customer Convenience part will assure to provide services with very much technology savvy manner to ease customers accessibility. It also confirms to maintain transparency with clients. • 24*7 Customer service will enable clients to contact anytime by the means of phone calls and emails. The professional team will adhere the client’s inquiries and support them. The team is inclined and insistent to provide the best assistance for the required queries.

Certificate Attestation for Angola by Abrodex

While searching for quick attestation services, one should look up the parameters legitimate Angola Attestation agents need to follow. Among all the options available, Abrodex Consultancy Services has acquired its name on the top. We are well-known to provide Angola Embassy Attestation Services. We maintain transparency of the procedure that is being carried out and keep updated with the progress with clients. Abrodex Consultancy Services offer clients with Attestation from Angola Embassy at different levels of authorities present and require, right from the notary to the embassy.

If you have any quarry related Apostille Attestation..... We are available